Outlook on the US Economy, Inflation and Interest Rates

The following is an excerpt from our President, Chief Investment Officer and Portfolio Manager David Breazzano’s semiannual CIO Perspective. You may access the full document via the link provided below.

The U.S. economic recovery is widely expected to remain strong over the next few quarters, which should boost consumer spending and reduce the unemployment rate as jobs are created and filled. With that in mind, the Fed will likely continue signaling that a gradual tightening of monetary policy is on the horizon, particularly if economic growth meets expectations. The Fed took the first steps in this process at its meeting in June, when it shifted to a slightly more hawkish tone. Encouragingly, the minor shift in rhetoric had minimal impact on markets, and hopefully the Fed continues to take steps to ensure that any change to monetary policy is a relatively long and well-telegraphed process.

It remains to be seen whether increases in inflation this year will be either transitory in nature, as the Fed believes, or more permanent and potentially difficult to contain in the event that the Fed does not act soon – with this latter perspective reflecting the view held by the market for most of 2021. I believe that it will be a little of both, and that the Fed will begin signaling to the market relatively soon, and well before the first actual rate hike, that a rise in interest rates is on the horizon. Even absent any significant inflationary pressures, the economic growth outlook, if achieved, will necessitate the Fed to raise interest rates above the current level of essentially 0%, though I do not believe that any such increase would adversely impact the economy as it should be on stable footing by that point. Measured interest rate hikes, beginning in 18 to 24 months as many forecast, would also provide the Fed with some tools to address financial conditions when the economy eventually enters another recession. I also believe that Treasury rates will increase over the short-to-intermediate term to reasonable levels, though the path of these increases will likely entail significant volatility.

In my view, inflationary pressure that is structural (rather than temporary) in nature is the primary risk facing the high yield market in the near term. This risk will become more pronounced the longer that the Fed takes to address it. Rapidly rising inflation could force the Fed to tighten monetary policy sooner and more aggressively than perhaps it presently intends, which actions could put the ongoing economic recovery in jeopardy.

Similarly, as both the market and the Fed try to interpret the “real” trajectory for inflation using multiple data points that are particularly volatile in the current environment as the world economy gradually reopens, the risk of a monetary policy mistake will become elevated. Such a mishap could have an adverse effect on the recovery as well. In addition, as mentioned above, I believe that interest rates in the U.S. will continue to increase, as the growth trajectory of the U.S. economy will warrant higher rates over time. High yield bonds, particularly the lower-rated segment, can absorb some of an increase in rates through further spread compression. In addition, as investors look for ways to hedge interest rate risk, bank loans, given the floating rate nature of their coupons, should remain in favor, particularly if inflation concerns increase as I anticipate.

From an issuer fundamentals and market liquidity perspective, we are currently in the midst of one of the best, if not the best, environments in the high yield bond market in the 40+ years that I have been investing in this market. Spreads reflect this reality. In this type of environment, when the market is pricing strong fundamental improvements with little margin for error, security selection remains paramount. I expect that the bonds of any high yield issuer that does not meet or exceed expectations will likely experience material price declines as a result.

Furthermore, given the limited potential for price appreciation above current levels, the performance of any bonds outside of one’s own investment portfolio is unlikely to hurt relative performance; on the contrary, those bonds held in one’s portfolio can contribute to relative underperformance in a significant way, particularly in the context of an underperforming (overweight) credit that becomes unexpectedly stressed or distressed. At DDJ, we are keenly aware of this dynamic and, as always, are continuously monitoring each existing holding in an effort to promptly identify any issues at a portfolio company that could derail our investment thesis and otherwise detract from the performance of our client portfolios. 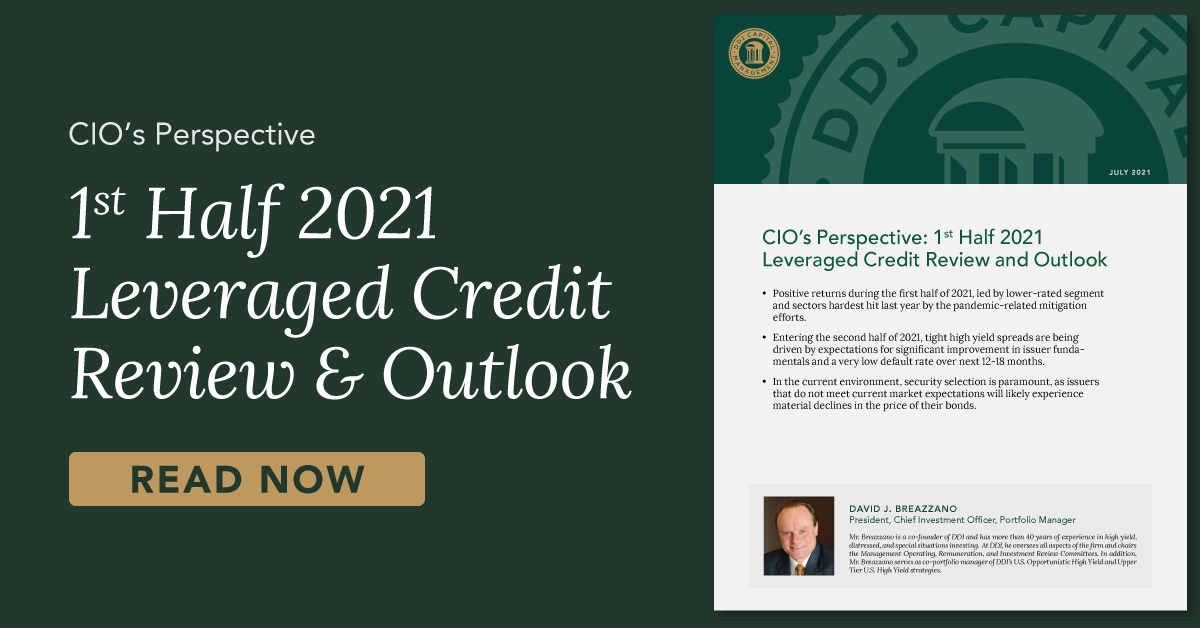